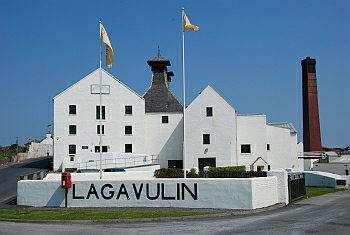 Lagavulin distillery is one of the three Kildalton distilleries in the south of Islay, sitting in a small and beautiful bay between Ardbeg and Laphroaig. One of the oldest distilleries in Scotland, it officially dates from 1816, though records show illicit distillation on the site as far back as 1742. By 1837, the original two distilleries constructed by John Johnston and Archibald Campbell were combined and occupied by Donald Johnston. Several legal battles took place in the 19th century with neighbouring distillery Laphroaig, centred around Lagavulin making a replica whisky in an attempt to dominate the market. In 1962 the still house was rebuilt incorporating the distinctive pear-shaped stills of the Malt Mill Distillery, and in 1996 the machinery was updated to provide a new mashtun and automated controls. Production increased in the 1990s, from being in operation for just two days a week during most of the 1980s. The distillery is currently owned by Diageo plc.

The Lagavulin distillery is home to perhaps one of Scotland's most famous whiskies. The peat and iodine of the sea give its renowned flagship 16 year-old single malt a pungent smoky flavour with tones of sea salt, rich fruits and lapsang souchong.

The distillery produces about 1.4 million litres of alcohol per year. Water flows down the hillside from its Lochan Sholum source through the peat, which helps give the whisky its distinctive taste. Malted barley has been obtained from Port Ellen Maltings since 1974 after floor malting ended. The malt produced for Lagavulin has its own special recipe where it’s dried by hot air and then peat for carefully controlled periods of time to promote consistency.

Lagavulin undergoes the slowest (double) distillation of all Islay’s whiskies. The wash stills are filled to 95% capacity, providing less contact between the vapours and copper sides, and the cut out of the spirit still is larger than at most distilleries. The result is a focus on character with more phenols retained.

For maturation, as with many whisky producers, bourbon barrels and sherry casks are mainly used. A final bottle will draw from both sources to sweeten up the malt. The warehouses are all exposed to the sea and so the casks absorb the typical maritime, iodine character found in the Lagavulin Single Malt.

The 16 year-old single malt can divide tasters and many consider it to be amongst the world's smokiest whiskies. It also regularly produces special edition whiskies, including a 12 year-old, a 21 year-old and a Distiller's Edition, finished in Pedro Ximénez Sherry casks. Independent bottlings that feature Lagavulin Whisky are extremely rare, with up to 98% of the spirit maturing as a single malt. Blends are not produced by the distillery.

The visitor centre dates back to 1998 and was established in the buildings that once were the maltings and kiln of Malt Mill Distillery.