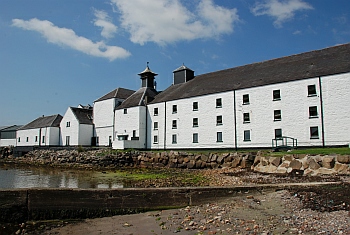 Laphroaig Distillery is beautifully situated in the south of Islay and is one of the three Kildalton Distilleries. Laphroaig Distillery was established in 1815, by Alex and Donald Johnston. In 1836 a rival, Ardenistiel Distillery, threatened to use the same water source. This water not only contributed to Laphroaig's unique character, but was also vital to the distilleries plans for expansion. The dispute lasted almost 6 years but ended abruptly with the death of the rival distiller Andrew Stein. Ian Hunter helped descendants of the Johnston family with the running of the distillery from 1908, and increased the number of stills from two to four in 1923. He became sole owner in 1928 and upon his death in 1954 his manager Bessie Williamson took over. It then went through a series of acquisitions from the 1960s onwards, and is now owned by Suntory Holdings after their takeover from Jim Beam Brands in 2014.

Laphroaig is consistently the highest selling whisky on Islay, which is no mean feat considering how strongly flavoured and peaty it is. Since 1994, Laphroaig has been the only whisky to carry the Royal Warrant of HRH, Prince Charles of Wales (the 15-year-old is reportedly his favourite scotch whisky).

The distillery produces about 2.7 million litres of alcohol per year. The distillery is fed peaty water from the Kilbride stream. The peat taken from the local moor is burned in kilns at a relatively low temperature to give the barley its signature smoky, medicinal flavour before it’s dried. Laphroaig is also one of the few scotch operations with a working malthouse, although 80% of malt is sourced from the nearby Port Ellen Maltings. The malts used are so heavily peated that the single malt is nicknamed “peat monster”. The distillery unusually has three wash stills and four spirit stills rather than equal numbers. The very tall conical necks on the wash stills helps increase the amount of reflux. The flat-based spirit stills are very narrowly constricted in their intermediate section to allow a more intense interaction between the spirit and the copper sides. The distillery also makes relatively late cuts of the spirit run. This all contributes to the distinctive taste of the spirit – Not so sweet, but with its more tarry, medicinal peaty notes preserved.

Over 90% of the barrels used at Laphroaig are American white oak Bourbon barrels, first pioneered by Ian Hunter back in the 1930s to give the right flavour for the Laphroaig Single Malt. The tiny quarter casks are used in the traditional Quarter Cask Expression, “creating a soft and velvety edge”, due to the oak surface contact being 30% greater than with standard-sized barrels. Spanish Oloroso and Pedro Ximenez casks are also used for some of the more uncommon expressions. Laphroaig has both dunnage and racked shoreline warehouses. The casks are generally aged to 10 years, although the 15 year-old variety is common, and some are aged up to 30 years. When deemed ready, they are transported to the mainline to be bottled.

The distillery has a decent sized and very extensive range of official bottlings, which include a variety of ages and different flavours. There have also been a variety of independent bottlings from the site.

Visitors can tour the distillery and taste the wide range of whiskies on offer.