The distilling season traditionally began on farms after the harvest and continued until late April. Until modern times this cycle was followed by all distilleries and there is still a 'silent season', usually in August when many are closed. 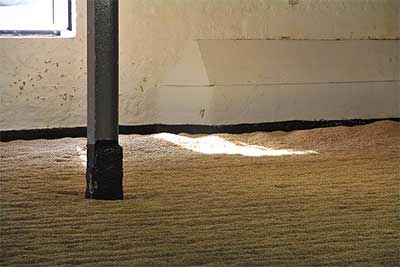 Today only a few distilleries have their own maltings - the process where plain barley grain is converted into malted barley:

The barley is first soaked for 48-72 hours in tanks or “steeps” and allowed to germinate.

The heat released has to be controlled to prevent the barley from killing itself.

Draining, spreading and turning the malting barley with rakes or shovels was arduous and could lead to the repetitive-strain injury known as “monkey shoulder”. 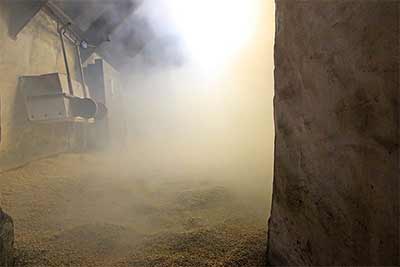 Traditionally, the fully germinated malt is next transferred to the kiln:

It’s dried on a mesh over a fire containing peat, thus contributing to that peaty taste evident in many malt whiskies.

Traditional kilns draw hot air from the furnace through the malt, facilitated by the steep roofs and pagoda heads of many Scottish distilleries.

The improved air draught offered by the pagoda roof (introduced around the 1890s), fans the furnace to core temperatures reaching 800-1200 deg C.

Kilns have mostly lost their function now that distilleries typically buy in their malt.

The detritus or “combings” (principally rootlets) are removed from the malt and used as cattle food. The malt is then coarsely ground and becomes known as “malt grist”. 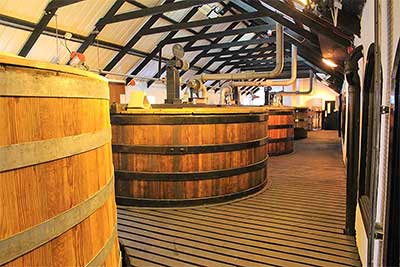 The malt grist is fed into the “mash tun” and combined with the correct measure of hot water to complete the conversion of dextrin into maltose.

This fermentable solution of malt sugars (“wort(s)”) is held in a receiver (“underback”), and cooled, so that yeast can be introduced without the maltose decomposing. The solid residue (“draff”) is removed during several washings and sold as cattle food.

The cooled worts, once injected with yeast, are fermented in “washback” tanks for approximately 36 hours to produce a weakly alcoholic, clear liquid (“wash”), ready to be distilled. 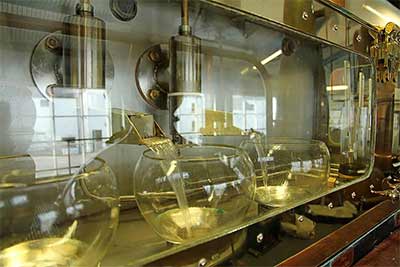 The wash is first distilled in the “wash still” to produce an impure intermediate product (“low wines”).

This is then fed via the spirit safe into the low wines charger. The former is a heavy glass-fronted and padlocked box that allows the emerging distillate to be inspected and directed onwards or back for redistillation as appropriate.

The final product - raw, unmatured whisky passes via the spirit safe to the spirit receiver and spirit store, ready for filling into barrels.

Early and late distillation fractions (“foreshots” and “feints”) contain impurities, so are recycled back for re-distillation with the low wines.

The “safes” used for spirit storage are exactly that. The moment the intermediate product contains alcohol, it comes under the control of the Excisemen, and the safes ensure that the spirits stay secured and are accurately accounted-for. 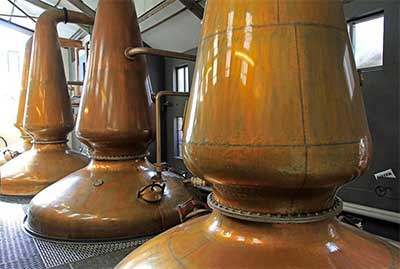 The lyne arm (a horizontal pipe from the top of the still to the worm) varies between distilleries in its design, and, in their view, uniquely contributes to the final product.

Further refinements to stills include:

A bulge at the base of the column (“Milton Ball”).

A refluxing coil in the head (Lomond still), allowing it to be “tuned” to produce distinctive lighter or heavier spirits for distilleries to market.

Water cooling of the neck.

“Man door” large hatches on the top of the base for inspection and cleaning.

Small glass portholes further up the neck which allow inspection of contents to ensure it does not rise too far up the neck and boil over (a wooden ball was previously swung against the neck, so that the sound determined the state within).

Casks are critical to the taste and appearance of the final whisky:

They will impart a characteristic taste to the whisky without dominating it or imparting a “woody”  flavour.

Some distilleries use intact barrels, others remake barrels from selected staves from multiple sources.

The barrel may be charred before use, a process which apparently assists the release of vanillin from the wood to give the spirit a pleasant and captivating smell.

No two casks are the same - one may produce a fine whisky and may be refilled and used again, whereas its neighbour may taste woody after one filling. 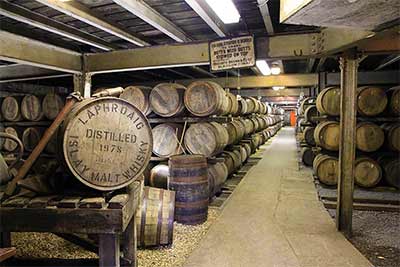 The whisky is left at least three years, but usually 8-25 years in wooden barrels to mature:

The bonded warehouses are cool and earth-floored to provide an even temperature and humidity.

The barrels lose about 2% alcohol per annum - the so-called “angel’s share”.

Occasionally, bottlings are produced from one single cask - the so-called “single” malts. More normally, several casks of similar ages from the one distillery will be “married” by vatting them together, then maturing them further for a few months.