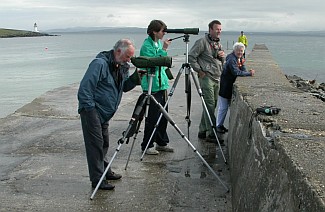 Islay offers fantastic birdwatching opportunities with over 100 species being present all year round in the diverse habitats, including wild open moorland and hills, unspoilt beaches and cliffs, mixed woodland and mudflats. Many birds travel vast distances from as far afield as Africa to visit Islay each year. Some, such as Arctic terns, go right round the world visiting Islay to breed before heading back to the Southern Ocean for the winter.

Winter brings thousands of migrating geese from as far afield as Arctic Canada, spending their time eating the plentiful grass and roosting at Bridgend and Gruinart. It's a magnificent sight watching them arrive each evening, or witnessing their departure each morning to their chosen grazing spots.

In spring, a variety of species arrive for breeding. The island witnesses the mating birdsong from corncrakes, choughs, lapwings and larks to name but a few.

The birdsong continues into summer to protect hard-won territories for breeding. Skylarks up high above the fields, blackbirds in the garden, lapwings over meadows and song thrushes on branches. Even sparrows add to the chatter!

At the coast you can spot seabird colonies like massive blocks of flat dwellers high up the cliff sides. Then the summer moves on and for many birds the migration cycle restarts again.

While we can't do justice to the full birdwatching experience on offer, here are just a few 'ticks' for your notebook... 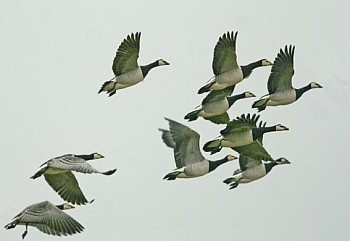 In winter, Islay holds 70 per cent of the world's Greenland barnacle geese and 40 per cent of the Greenland white-fronted goose population (37,000 and 13,000 respectively). Loch Gruinart hosts one of the main barnacle goose roost sites and some of the most important feeding areas for both barnacle geese and white-fronted geese. Geese are highly gregarious and the large flocks are noisy with distinctive shrill barking calls. As they fly overhead, you can also hear the creaking sound created by their wing beat. 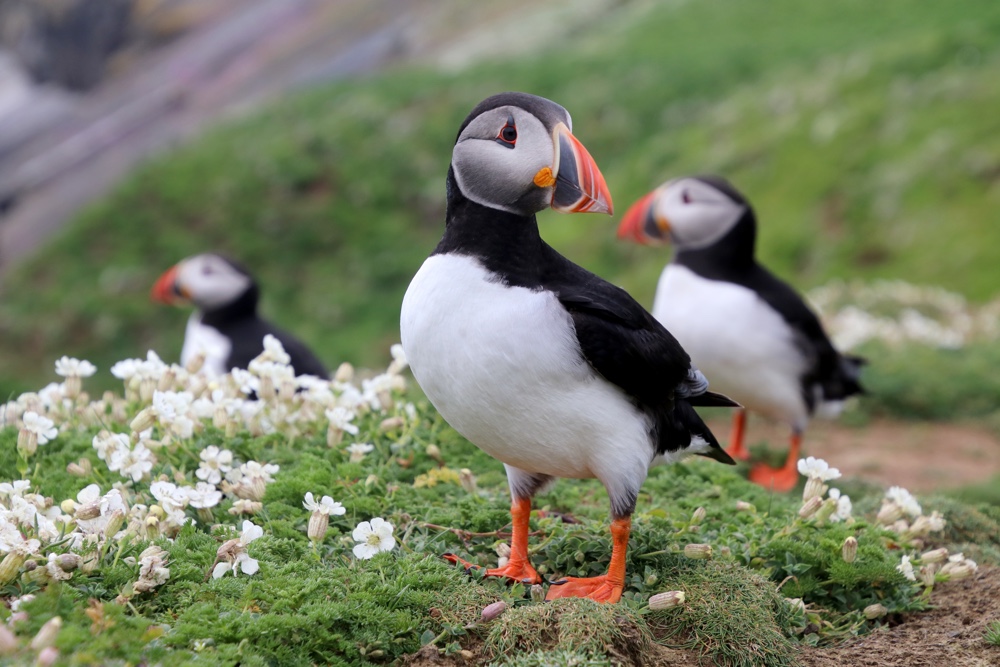 Known affectionately as the "clowns of the sea", puffins have a rather comical appearance with their strikingly coloured beak, trademark waddling gait and unique behaviour which always makes them a popular, if increasingly rare, sighting! They breed colonially and prefer offshore islands with high cliffs. Puffins on Islay are mainly summer visitors but are not easily spotted as there are at most, only one or two pairs. 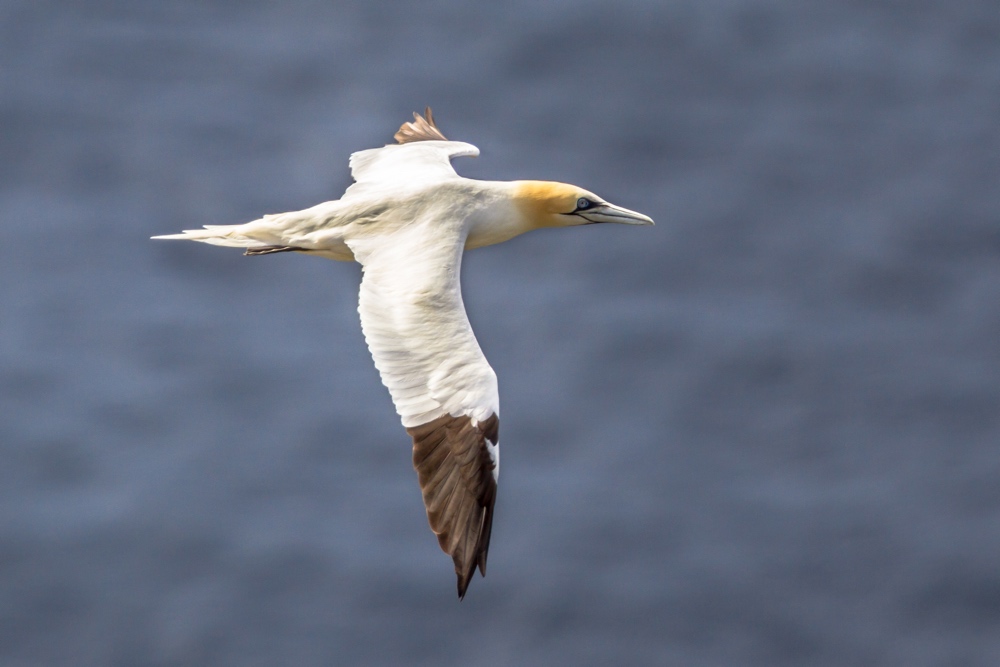 With their large wingspan (bright white with black wingtips), shiny bright feathers and long bills, gannets are very impressive birds, particularly in the sunshine. They hunt fish by flying high and circling, before plunging into the sea and pursuing their prey underwater, which is spectacular to see. They breed only in a few locations such as Ailsa Craig near Mull and the Bass Rock in the Firth of Forth. 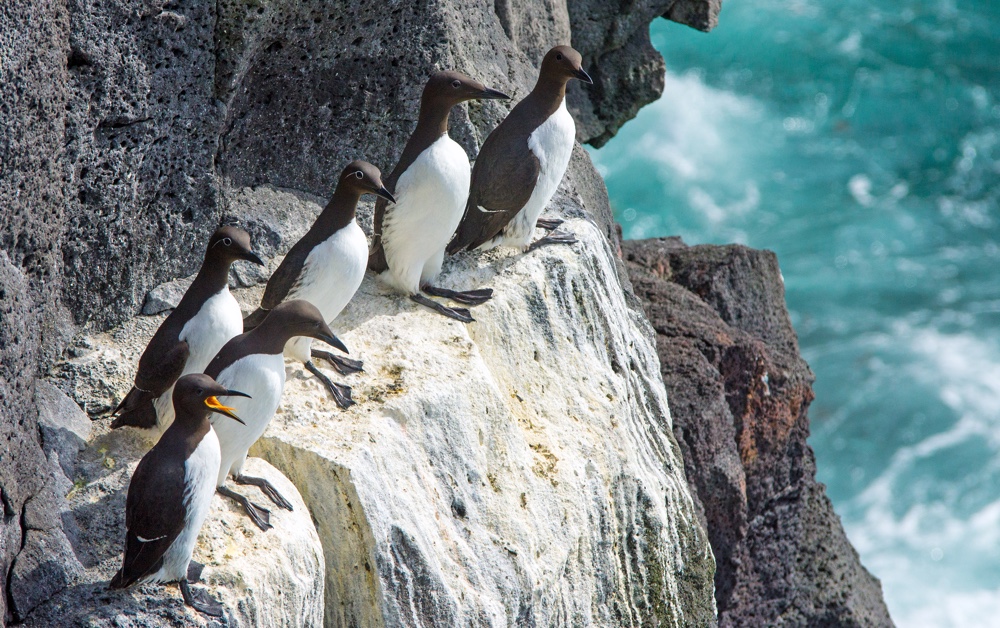 The common guillemot is typically found in small numbers, scattered around rocky islets. They have fast, direct flight but are not very agile. They are, however, more impressive underwater, typically diving to depths of 30–60m with depths up to 180m recorded. They breed along rocky coastlines in crevices in rocks or between boulders, rather than on open ledges. Guillemots feed on fish and crustaceans. 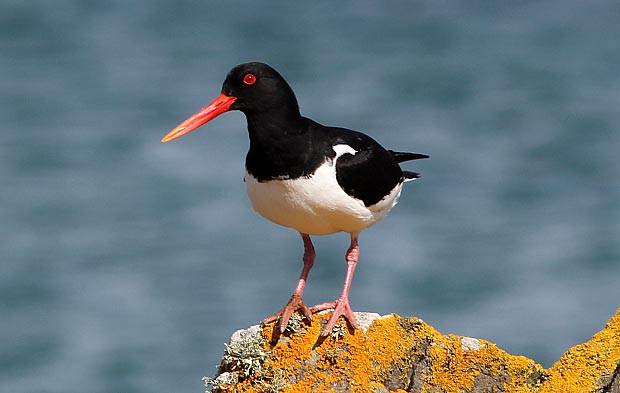 The oystercatcher is a large, stocky, black and white wading bird with a distinctive red beak seen in coastal areas. They are common on Islay and can be easily spotted, whether alone or in large groups. They use their bills to great effect for smashing or prying open molluscs. They breed on shingle and rocky beaches, dunes and on the grassy tops of small islands. The nests are simple scrapes in the ground which may be lined, and placed in a spot with good visibility. 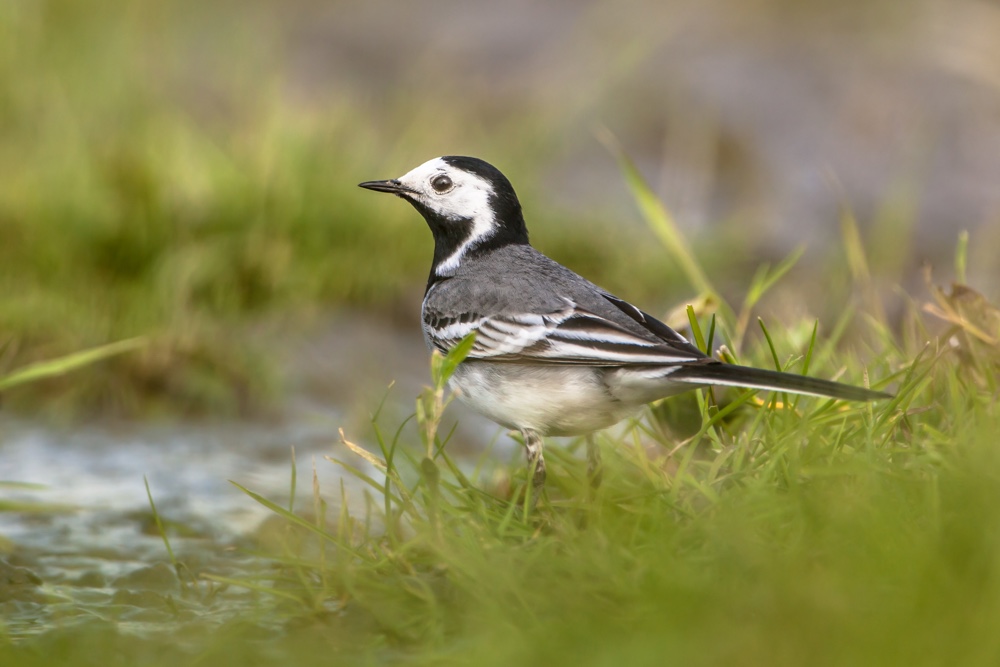 This small, long-tailed and rather sprightly black and white bird is a resident guest on Islay. It frequently calls when in its undulating flight and lives mainly near rivers and streams close to woodland areas. When not standing and frantically wagging its tail up and down, it can also be seen dashing about over lawns or car parks in search of food. They eat mainly insects, but also seeds and household scraps in winter. 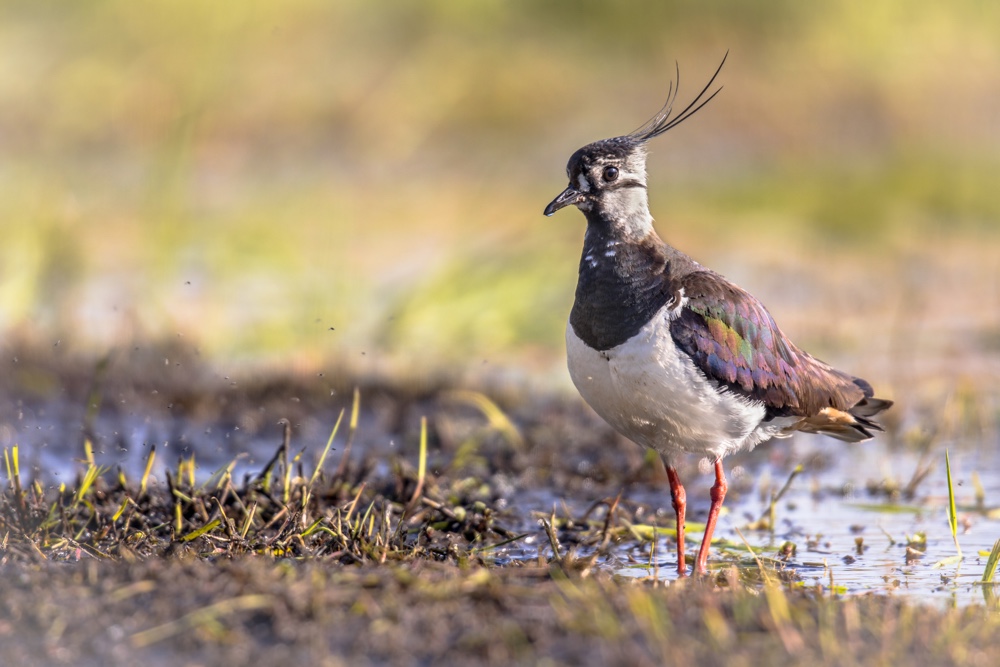 This distinctive bird lives mainly on farmland, feeds on worms and insects and is often recognised by its slow, irregular wingbeats in flight and its shrill, wailing cry. A group of lapwings is rather endearingly called a "deceit". Lapwings are resident on Islay and are mostly seen around the Loch Gruinart area. Sadly, lapwings have suffered significant declines recently and it is now a Red List species. 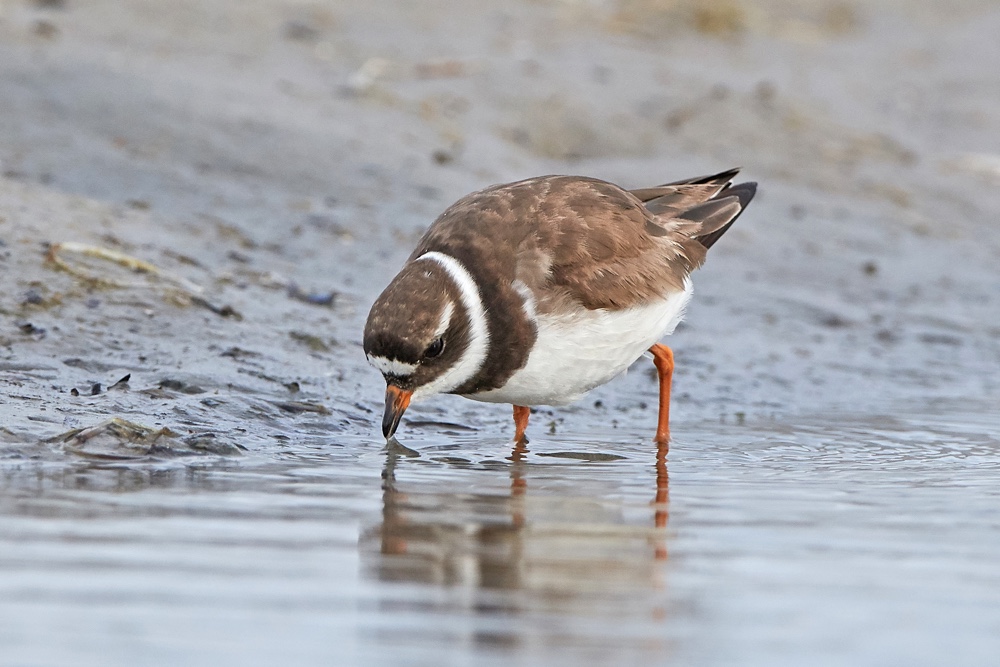 The ringed plover is a regular and common guest on Islay and is a small, dumpy, short-legged wading bird. They feed on insects, worms, crustaceans and molluscs. It can be seen around the coastal areas and breeds in sandy and shingle beaches. Some birds have begun breeding inland. It makes nests on the ground in open areas, often using little bits of seashells and has around four very well camouflaged eggs. 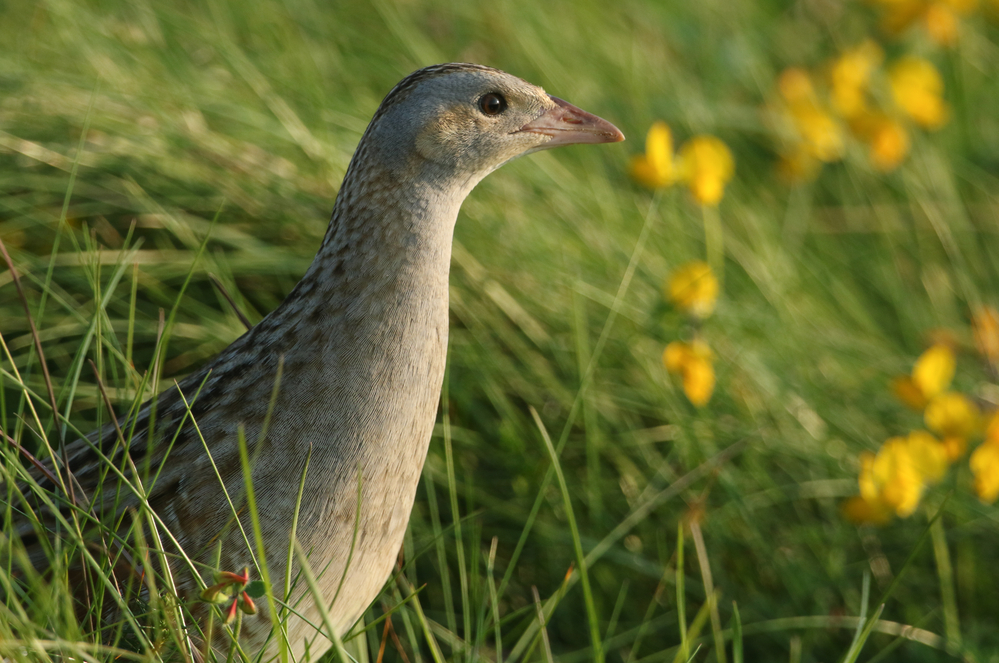 Corncrakes are related to moorhens, coots and rails, but differ from most members of the family by living on dry land. They are very secretive, spending most of their time hidden in tall vegetation. On the Rhinns and the Gruinart flats, their presence in spring and summer is betrayed by the repetitive, rasping call of the male. In flight, their bright chestnut wings and trailing legs are unmistakable. Corncrakes breed on Islay and feed on insects and seeds.

All but extinct from England, the hen harrier has a strong population on Islay. Males are grey with black wingtips, females are brown with a white rump and a long, barred tail. They are found on the moorlands of Islay, mostly flying low in search of small birds and mammals. The hen harrier was one of the stars of the BBC Springwatch nature programme during their visit to Islay.

The buzzard is the most common bird of prey in the UK and is also frequently seen on Islay.  It's quite a large bird with broad, rounded wings, and a short neck and tail. When gliding and soaring it will often hold its wings in a shallow "V" and the tail is fanned. Their plaintive mewing call could be mistaken for a cat. It breeds on Islay and feeds on small mammals, birds and carrion. It will even resort to eating earthworms and large insects when other prey is in short supply. 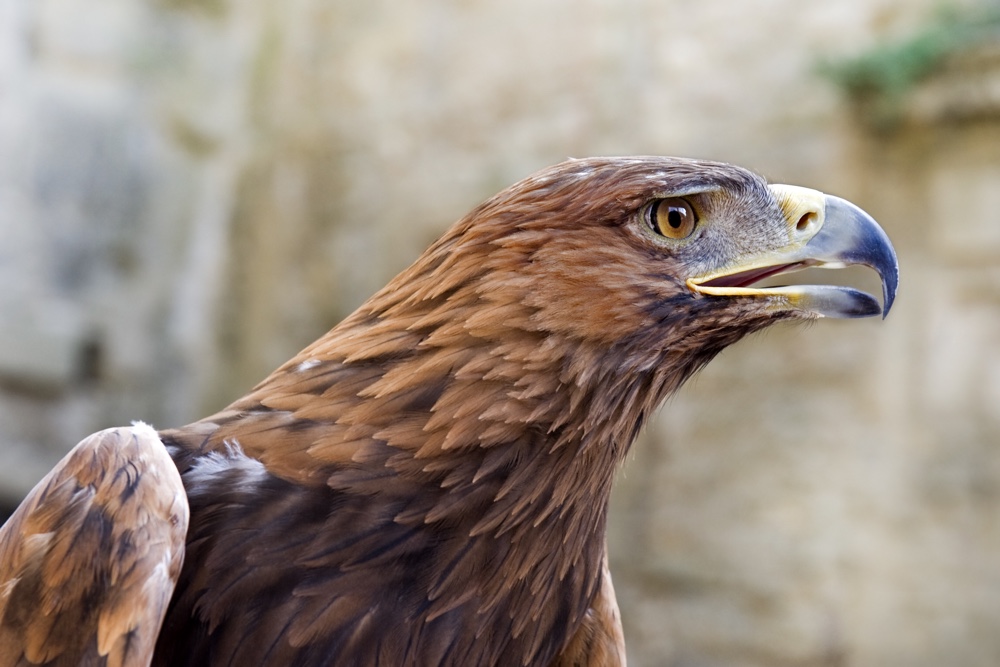 A huge bird of prey which lives mainly on open land where it hunts birds, mammals and some carrion. Golden Eagles are resident all year on Islay and are most frequently spotted on the Oa Peninsula. With its long broad wings and longish tail, it has a different outline to the smaller buzzard, but likes to soar and glide in a similar manner. Eagles have traditional territories and nesting places which may be used by generations. They have been illegally killed in the past and are still occasionally poisoned, or have their nests robbed.